ALLAN:  Well, I think you had Puck exiting through the vom so as to suggest that she is heading off to, “another part of the forest,” to find the lovers, work her magic—
ROXANNE:  Allan!
ALLAN:  Pardon, pardon.
ROXANNE:  I’m the director here. I understand the symbolism of exiting through the vomitorium!  What I don’t understand is why on earth I would block something without using the diagonal.  Quel étrange.

Genevieve has been hired to play Helena at the Pacific Classical Theatre Summer Festival’s upcoming production of A Midsummer Night’s Dream.  She gets a little more than she bargained for, however, when the show is hijacked by the real Robin Goodfellow, who, despite her good intentions, can’t resist using her magic on the actors. 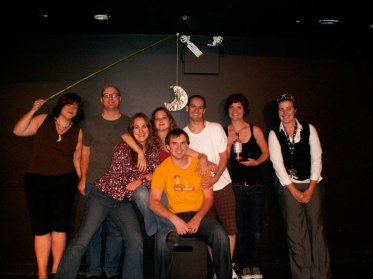 “Kathryn Kirkpatrick is so heroically and hilariously in character as the drunken director of an apparently doomed production of A Midsummer Night’s Dream,
it’s as if she’s been possessed…tons of fun.”
Colin Thomas, The Georgia Straight